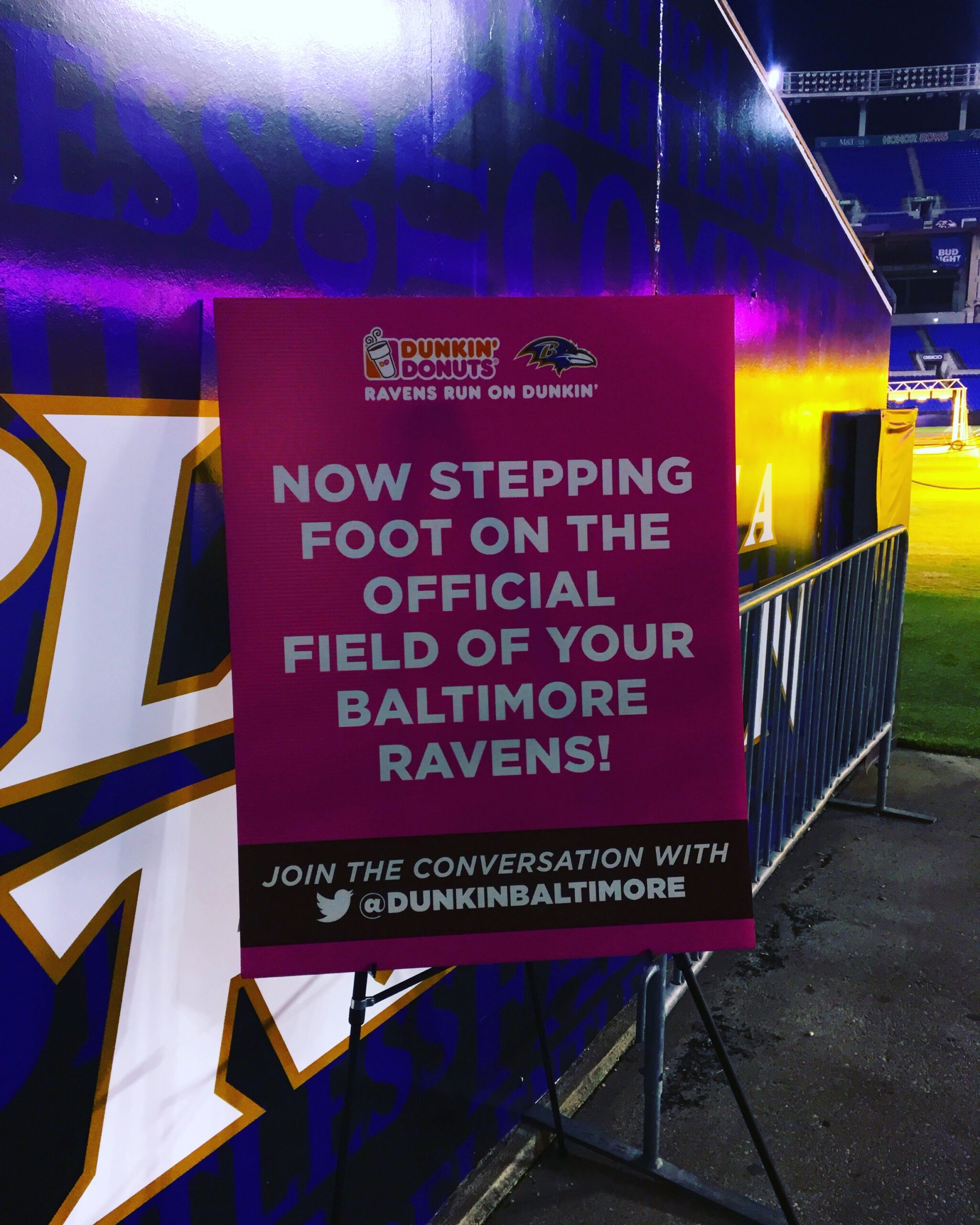 M&T Stadium – A Look Inside The Ravens Nest

I recently had a pretty awesome opportunity to visit M&T Stadium. For those who don’t follow football or live in Baltimore,MD., this is the place that the NFL team known as the Baltimore Ravens call home. The team itself has been “eh” this season, but their fans are still with them in hope that they’ll bring home a championship. So… how did I manage to get to visit the Ravens stadium without having to buy a ticket to attend a game? Read on.

This is the beginning of the Twitter DM that was waiting for me one morning. I’m a “Sweeper”, which is a person who enters (and wins) sweepstakes religiously, so getting notifications like this is sometimes routine but always exciting to get. What had I been chosen for? It was a chance to attend a Meet & Tweet. In my opinion, a meet & tweet is when a person attends an event and while attending, they live tweet what’s going on at the event to their followers. I’ve done this many times before and I love being able to keep my friends and readers in the loop when I’m at events.  This particular meet & tweet opportunity was a little different. This was a behind the scenes look at a football stadium that I’ve never been to. I admit it; I’ve never attended a Baltimore Ravens game. I would really love to, though.

With that being said, I was super excited to attend this event. They even told me that I could bring a +1 to share the experience before! November 14,2016 was the date for me to attend…. and that was last night. I ended up attending the event without my +1, but I still had a good time. There were about 20 other people the event, including two WBFF news anchors (hi, Traffic Jam Jimmy and Candace Dold) ! The tour guide was phenomenal and so incredibly astute at knowing about the stadium, the Ravens and their history. I was able to go into the clubhouse, which is normally at least a $200 privilege, and I was also able to visit the Press Room area. The Press Room was a very exciting thing for me because as a Blogger, it’s my dream to be able to rub elbows with the big journalists out there in the world.

The view in the press room onto the football field is stupendous, too; Just awesome. After sitting in the press room for a bit, we mozied on over to the field. That’s right… I got to walk into the Ravens football field! The grass felt soft; like the kind of grass would might want to have in your own yard. A football field doesn’t look as large in real life compared to when you see it on TV,though. It seemed small, but huge at the same time to me, though. It was even kind of surreal to me. The grow lights on the field made a pretty glow and there were lighting trims that made the purple glow alongside the stadium stands where the fans sit as spectators when the game is going on. It was fantastical.

After being treated to the football field visit, we were escorted to a surprise … a party in the Ravens locker room, and a meet n greet with Ravens #73 Marshal Yanda, a Tackle for the Ravens team! Marshal was very nice and shook hands and took pictures with everyone. He even signed my Ravens hat!! Sadly, I was not able to get a photo op with the big guy; my phone died just when I arrived in the locker room. But, the party was awesome! It was hosted by Dunkin Donuts and of course they had a ton of donuts and coffee to eat and drink. But they also had a yummy food buffet and other drinks to appease all of us. The company really did a wonderful job at holding this event for us. I hope to attend other Meet N Greets like this in the near future. Until then, I leave with the photos I was able to take before my battery fizzed out. Enjoy and as always, Thanks For Reading … 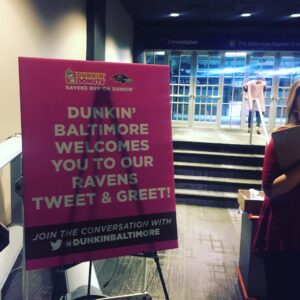 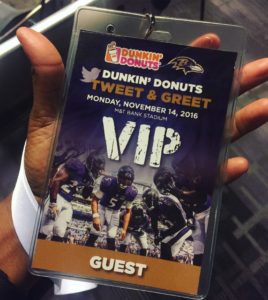 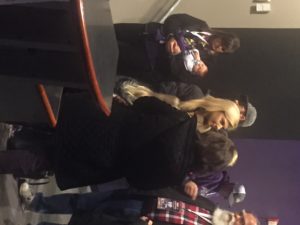 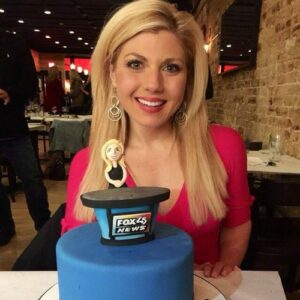 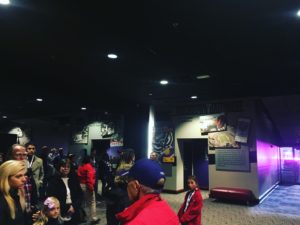 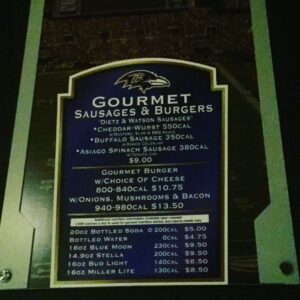 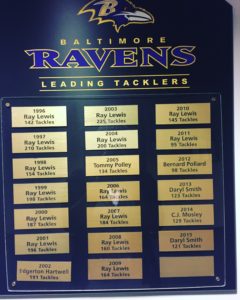 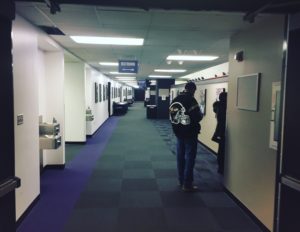 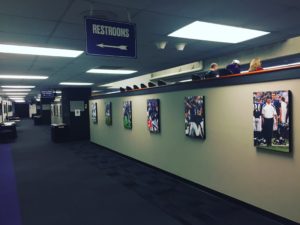 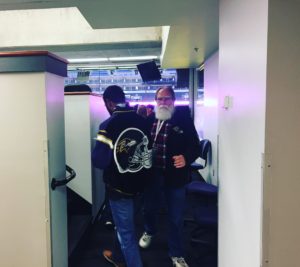 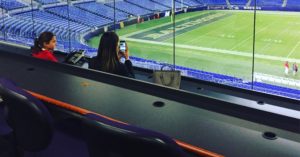 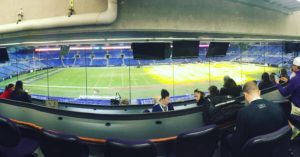 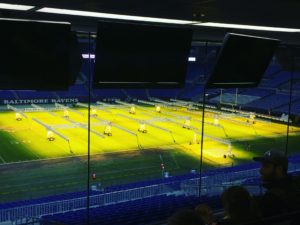 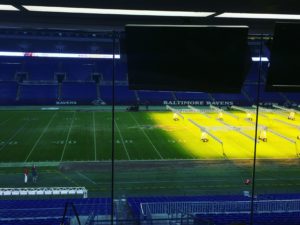 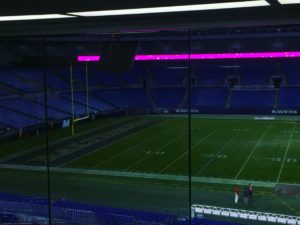 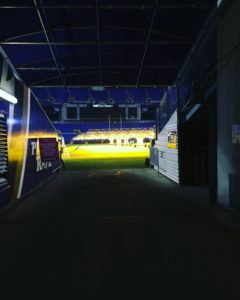 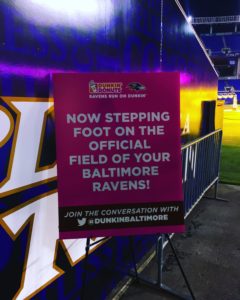 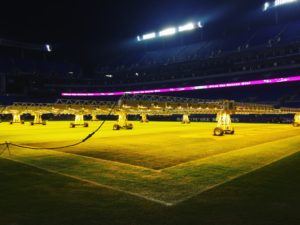 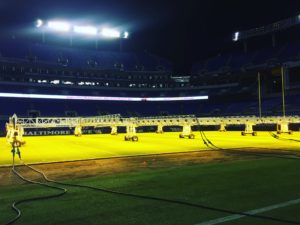 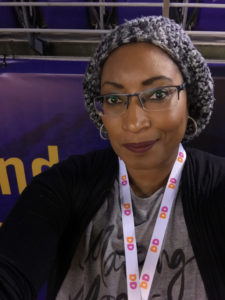