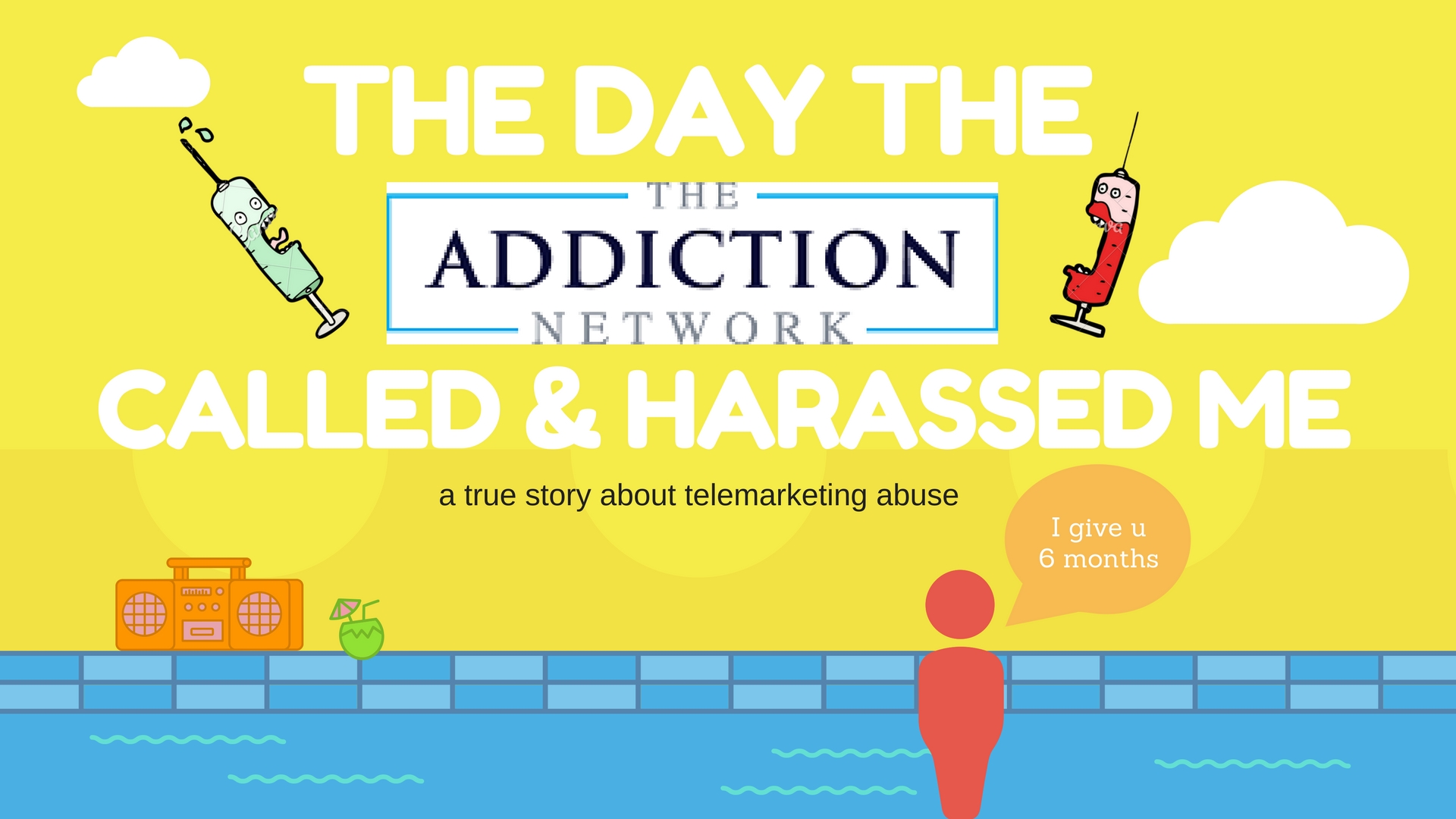 The Day When “The Addiction Network” Called And Harassed Me

The Addiction Network. Have you seen that drug commercial? The one where there is a guy talking to the TV screen and tells you to call the number because you can’t beat addiction by yourself? Yeah… that one. Well, I received a phone call from this network. And … they harassed me. To the point where I felt threatened. This is my story about The Day When “The Addiction Network” Called And Harassed Me.

One day, I’m sitting on my sofa browsing the net on my ‘puter and I get a phone call. I didn’t know the number, but I’d been getting repeated calls from the same number throughout the day, so I decided to answer it. Wrong fucking decision. Some guy was on the line, and he was trying to tell me about how The Addiction Network could help me with my drug addiction. I tried to tell him that I wasn’t a drug addict. When questioned on how he got my number and why they kept calling me, the “representative” said, and I quote”,

It’s obvious that you do have a problem and someone in your life knows it and cared about you enough to try and get you some help.

I then responded by telling that I DO NOT do drugs, I’ve never used drugs, and I’d appreciate it if they would stop calling my number. He replied with, “We are trying to save you by giving you the help that you need, Patsy. Your friends and family are worried about you“. Honestly, I started to freak out. WHO in my small circle of family and friends would think that I’m not just using drugs, but abusing and ADDICTED to them?

When I told the guy that I thought he was being unprofessional by this company calling into someone’s home and falsely accusing them of being a drug user/abuser, and you know what he said to me? THIS…  “You have a problem and you need to take our help. If you don’t… you’re gonna die.” Again, he was told that I don’t use drugs. He shot back at me, “I give you 6 months and you’ll be calling us or you’ll be dead”, and then he hung up on me.

What In The Hell Just Happened ?

I sat there on my couch,looking at my phone… bewildered. Like, what in the entire fuck just happened? A person who I don’t know from Adam calls into MY house, accuses me being a drug addict, damn near tried to force me to take help over the phone, and then when I refuse, basically CURSES me to drug addiction and./or death? REAAAAALLY? Is this what “The Addiction Network” is about? This is how they “help” people? If I were a drug addict, I think I would have just taken extra drugs that day in order to forget what had just occurred. And, then I’d probably further withdraw myself from my family because paranoia may have kicked in. Way to go, Addiction people.

But seeing as how I’m not a drug user, I just felt extremely harassed and angry. Something really needs to be done about people and companies like these. They shouldn’t be able to attack people that way and then not reprimanded for it. What do you think? Am I overreacting? Should I just forget about it? Has this ever happened to you? Talk to me about this topic by having a discussion in our comments section below. I would really like to talk about this alarming trend.