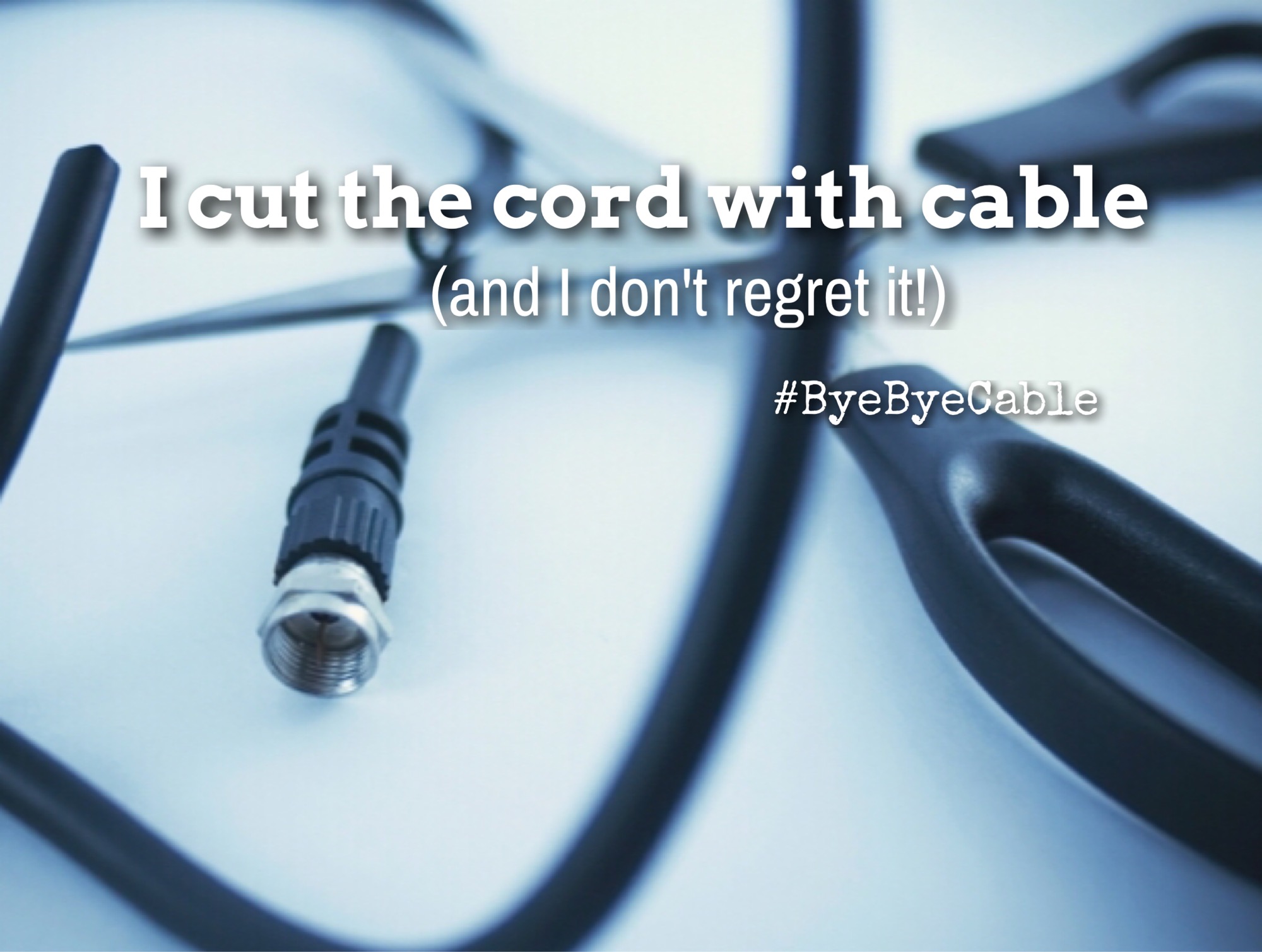 I Cut The Cord With Cable (And I don’t regret it) !

Cable. I was fortunate enough to have had it in my home since around the age of 8. It was a glorious thing. A little box with a button that would slide from numbers 00 to 100. Numbers that would magically help the TV screen display a variety of shows for our viewing entertainment. Over the years, cable advanced and it went from a sliding button on a box to a hand held remote controlled by Dad or Mom that would reign over what families would watch for the night. Now, the boxes are high tech and the television screens are astoundingly huge with crystal clear pictures. It’s pretty amazing, I give that to the cable companies. But with everything in life, changing of the guards happen.

This new cable change is a big thing for me. I thought I had cut the cord from cable when I became a DirecTV customer so many years ago. I was happy with my cable channel choices and I felt I had the best that the cable companies had to offer. That and… I really hated using Comcast,lol. For 9 years, this girl stayed true to DirecTV. Even when my bill raised from $80 to $100 and $100-$160 per month..I stayed. Then, Spring 2016 happened.

And With The Spring, Came Change.

When the spring of 2016 arrived, I was introduced to the world of streaming TV. I knew of it before when Netflix came around and killed off the big videos stores (r.i.p BlockBuster and Hollywood Video). I love my Netflix… but a new crew was coming into town, and they are giants. Roku hit the tracks running with their streaming stick and boxes, and Amazon came out slugging with the Fire stick. And then, Amazon added Alexa to the Fire Stick so you could have voice control. OUTSTANDING! Man, I tell you… streaming TV was getting me pretty hyped up. And… POW! More great features that were already out, but I didn’t know about; Hulu and SlingTV! I never knew that there was so much more out there than the channels cable, satellite, and dish were so graciously offering us …for an over-inflated price.

Seeing all of the options that were open to me as a consumer, I was admittedly overwhelmed at first. I wanted it all, but I was kind of scared about moving away from my comfortable cable subscription. So… I used free trials of every streaming TV that I heard about. I already had a Roku and Fire stick, so it was easy for me to subscribe to Sling and Hulu. They are just apps that you add onto the streaming sticks/devices, and then you sign up or create an account.

Sling has a 7 day FREE TRIAL and they also have a deal that if you prepay for a month of service, you’ll get a Roku Express for free. I actually took advantage of that deal this month in January, and gave the stick to my daughter so she could stream all her fave TV channel and shows from it in her room. SlingTV offers live streaming, which means that you can watch all the channels on that stream in real time. The channels on Sling vary according to the package you subscribe to (The package prices are $20, $25,and $40) and also vary according to the area you live in.For example, I don’t get NBC or FOX in my area of Severna Park, but people in D.C. can get those channels. Bummer,I know. But according to the company, they are working to remedy that. I hope so, because I really enjoy the service and totally appreciate that I get to watch live LOCAL TV here.

What About Hulu, Though?

I also signed up for a trial from Hulu. It was a limited offer 30 day trial and it was glorious! To me, Hulu is like Netflix only stocked with both movies and TV shows that you actually want to watch (oh…did I just roast something?). Really, Hulu isn’t just a catch up on what happened a week ago on your favorite show. You can delve into the vast selection the site has and find old gems that go back into the 60’s and 70’s. I’m an 80’s type of person, so when I found the ENTIRE COLLECTION of Miami Vice, Knight Rider, and Airwolf, you bet your booty I watched them. It took me about 2 weeks of total binging to do it, but I did. Then I watched a full season of The Fall Guy. The 30 day trial I had from Hulu convinced to subscribe to them as well, and they’re priced perfectly. It’s only $7.99 for a month of service and you can cancel anytime. Not sure if Hulu is right for you? Take it on a test drive and use the 2 week FREE TRIAL. I can just about guarantee that you’ll want more once you try them out.

If you’ve been paying attention, I just admitted to having 4 subscriptions to different streaming companies. The beauty of that is, even with all the subs I still pay WAY LESS than what I pay every month for cable of DirecTV. The total cost for my Amazon, Netflix, Hulu, and SlingTV is $55 a month! Here’s the breakdown for you:

All of that… for $55. Compared to the over $160 I used to pay for a cable subscription. In my opinion, streaming sticks and IPTV are the way of the immediate future. It’s easy on your pocket, you get exactly what you want, and it’s mobile; you can take your streaming stick and apps anywhere with you. And as long as you have a good internet connection, you’ll be fully entertained! So now that you’ve been informed at what entertainment you could be getting and the money you’ll definitely by saving vs cable… what are you waiting for? GOOOOOO!!