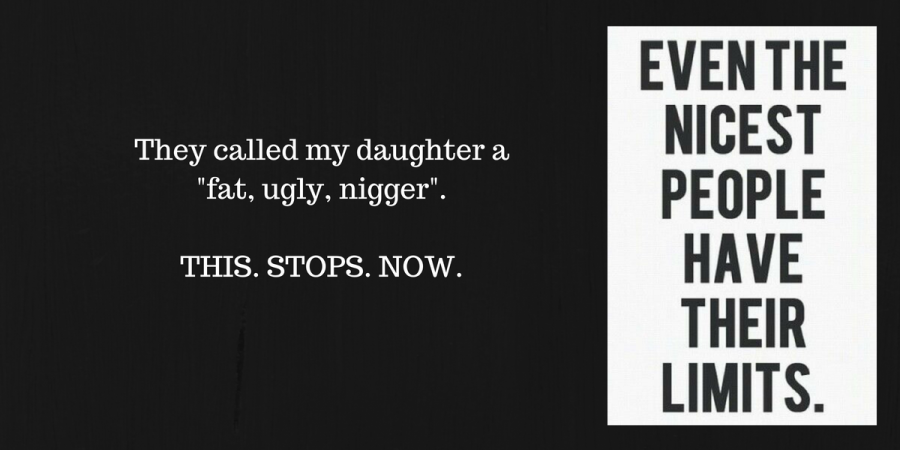 Hey, Everyone. Today is the day that I start being real with you, so yes… there will be emotions and cussing here. You know me as “Tricia from Tricias-List.com”… a Blogger. But I’m more than that. I’m a Black-Mexican woman. That’s Afro-Latino for the “on trend” people. I’m a professional, a business owner,  a Registered Voter. Moreover… I’m a Mom. I have 3 kids that I love. And I will go fisticuffs for in a fucking heartbeat if anybody messes with them. That’s why I’m writing this blog today. You see, a few days ago (July 6,2018) … my daughter was verbally attacked in what could and should be considered a hate crime.

I grew up in San Antonio, Texas. The 1st 5 years of my life was spent living in the projects… Victoria Courts, to be exact. I wouldn’t say that it was a racist area; It was a mix of Black and Latino at that time. When my parents were able to, they picked up and moved my younger brothers and I to a “good neighborhood” on the North Side. I didn’t really fit in, but I tried to. I joined athletics, dance team, and I always worked my ass off to make the best grades. That got ,my many societies. Spanish Honor Society, National Honor Society, Computer Club, PAL. I did everything for people to see ME and not my color. And you know what? It worked. A school dominantly white and rich… and they saw me… Patsy. I was invited me into their homes to attend parties. I felt accepted. Until that one day.

I was walking home from school, and a loud big truck came screeching past me. And a white male stuck his head out of the window and yelled, “A HA YOU’RE A NIGGER!!”. Like… what? Yes. I’m Black. So what? I went home, and I cried to my daddy. This is what he told me:

“a nigger is just an ignorant person. Anybody can be nigger. That person who said that you… He doesn’t know you. He’s talking and acting stupid. HE’s the ignorant one. So… who’s really the nigger?”

That talk lifted my spirits somewhat. And, I used that as a shield to keep me from losing my shit whenever the time would come again where a person would try to use it as a weapon against me. It’s worked. I’m 44 and I’ve not been hurt by the word. Until Now.

Those Bastards Did What?

2 days ago, I was told that my 18 year old daughter was attacked. Verbally. By a pack of grown ass “men”. She was walking in her neighborhood in Portland, Oregon, and a pick up truck with out of town/state license plates drove past her. They yelled out, “you’re a fat, ugly, nigger!”. Oh, did I mention that they also had a confederate flag in the back of the truck? Yeah… classy right?

When I heard that this had happened to her, I immediately flashbacked to what happened to me as a girl. It angered me. It hurt me. I called Shan and she said that she was okay, and she blew it off. She knows that things like that happen, even though it was probably the first time it has happened to her.

I never taught my kids to hate anything or anyone. I didn’t even teach them about the differences in skin color. Because… WHY? There was no reason to point out differences like that… it’s stupid. Besides, in my family I have cousins who are really dark (like midnight), and I have cousins in my family who can pass as members of the damn Aryan Brotherhood complete with real blue and green eyes as well as dirty blonde hair…  while you’re bullshitting. I just want to know why the hell people in this country feel like they can do this.

Some people will say that it’s this POS (oh I mean POTUS) in office fault, but it isn’t. Not really. This behavior has been around since the beginning of America’s birth. The current POTUS just reignited the fuse to the powder keg and now… well now we’re seeing them come out of the woodwork. Because they’ve been empowered and emboldened. Well…. I WON’T HAVE IT.  I will not sit idly by and let this putrid pile of bile and shit bubble up and ruin this country again. This will not touch my babies again without consequences.

If a revolution is what those kind of people want… I’ll be one of the leaders there to fight on the front lines. Enough… Is.. ENOUGH. (to be continued…)